‘Tis the time – our last episode of the year! With guest Tom Friedman, we look at macro trends that swept through our convoluted world in 2022. Which issues will continue to dominate headlines in 2023?  Which trends will abate?

The big issues of our time transcend borders, nationalities, and oceans. This past year, power has become more diffuse. Many leading western countries are paralyzed by crisis and polarization. New players are asserting themselves, taking a slice of the power pie. We identified eight macro trends: shifting demographics, economic uncertainty, China’s stagnation, the green energy transition, the uncertain future of tech, the rise of Africa, ‘everything-washing,’ and women’s rights. Our list is far from exhaustive, what do you think we missed? Our guest Tom Friedman, internationally renowned author, reporter and NYT columnist joined us to discuss his own list and what we should be looking at in the coming year.

The year 2022 was – another – year that will keep historians busy far into the future. As we turn the clock to start a new year, we asked Tom Friedman what worries him and what gives him hope. He said, “We have connected every node in the world now, then we took out the buffers, and then we still did the crazy stuff we do. By the way, we replaced the buffers with grease. So now instability in one node gets instantly transmitted to the whole system whether it was a pathogen out of Wuhan China or financial contagion […] and that makes it more fragile in some ways.”

And what is he optimistic about? Friedman said, “[In] our recent midterm elections, we saw an expression of civic health that no one predicted, that no one anticipated but that was remarkable. Principled Republicans, principled Independents, principled Democrats, went into the voting booth, identified who was an election denier, whether at the state or local or federal level, and in virtually every case, not all but virtually every case, identified those people and made sure they weren’t elected. And that is a sign of civic health that buoys me.”

Friedman recently wrote a column about China’s increasing decoupling from the West and from the international system. Altamar’s Peter Schechter asked why he thinks that is so important. He said, “My view is that the years 1979 – 2019 were an epoch in US-China relations. It was an epoch of unconscious integration. […] a byproduct of that integration were two things, more people, hundreds of millions of people…by some estimates, 800 million people came out of poverty faster than any time in the history of the world. And there was no great power conflict. As four decades go, it’s a pretty good four decades. We will miss it when it’s gone. And it’s going.”

Why is it going? Friedman explained, “It’s going primarily for two reasons: One is because of China’s own development. It’s become a pure economic and military power. […] We particularly get antsy in the case of China because it doesn’t share our values. When we were trading with China for most of those years, for 30 of the 40 years, China sold us shallow goods – goods we wore on our shoulders, goods we wore on our feet, goods we wore on our ankles, solar panels we put on our roof. We sold them deep goods- software and computers that went deep into their systems and their government, everywhere. [Now,] when [China] wants to sell us deep goods, the fact that we don’t share common values really matters. […]  The other [reason] is that Xi Jinping came to power in China. China today is so much more open than it was 40 years ago, but thanks to Xi, it’s now more closed than it was 10 years ago. So, he took China on a complete reverse in terms of openness for the world into China, and for China out to the world. And those things together have really ended this 40-year decade of one economy, two countries.”

We compiled our list of megatrends, what was on Tom Friedman’s list? He told us, “The two shaping megatrends in our world today are: a technology supercycle, and a climate supercycle. In technology, we’ve developed the ability to basically embed sensors, connectivity, processing power and acting power into everything. […] The other, of course, is in climate. That we emit co2, we melt ice we change ocean currents, we change wind currents, we produce extreme weather. The climate gets weird. We’re in the middle of a giant phase of global weirding. […] Those two are the big megatrends out of which everything else really flows.”

From Russia’s invasion of Ukraine to new and shifting alliances to the backsliding of democracy, political trends seem transnational rather than country specific. Altamar’s Muni Jensen asked, “Can you draw the power landscape that you see today?” Friedman said, “Those two super cycles I just described in technology and climate have made us interdependent. That’s the uber-uber trend you know, sitting on this planet. And so, the big challenge politically is – can we collaborate now as a global species in order to manage this technology trend and to manage the climate? […] in a rapidly changing world, I’ll bet on [the advantages of] open systems seven days a week. In a rapidly changing world, open systems always get the signals first. When you’re an open system, you get all the signals of change first and second open systems like ours, if we keep it open, hopefully, attract the most high IQ risk takers. And high IQ risk takers are what are the engine of wealth.”

In her youth and social justice-themed segment on Altamar, Téa Ivanovic asked about why we are seeing seemingly contradictory progress and backsliding of women’s rights in 2022. Friedman responded, “I think it’s part of a broader trend that the danger here is that because of the nature of technology, it is a lot easier to get your ‘freedom from’ whatever that tyrannical thing is. […] ‘Freedom to’ is another question. And ‘freedom to’ is what it’s all about. Because ‘freedom to’ requires institutions. That is, we are free to start a restaurant in Washington because we have rules and regulations that enable us to do that. We are free to start a company because we have markets that are properly governed. We are free to have an abortion in Maryland because our state legislature has enshrined that in law. And the danger of all these new technologies and protest movements is that they’re really good at getting freedom from the old system, but they’re really bad at producing ‘freedom to’, that is coming together on a new structure that will enable everyone to have their rights. That’s the real tension up there.”

The conversation turned to the economy. What is the level of economic distress the world is facing and where? Friedman said, “We’ve just finished a 15-year period, almost 14 years of basically interest-free money starting in America, then in the whole western world, then spilling out to the developing world. And that era is over. God, it was fun when it lasted. But it’s over. And we’re going to normalize here. And that doesn’t mean interest rates are going to be 10%, I don’t think. But they could be five or six or four for a while. And that will affect every entrepreneur, every business, every saver….”

We asked about sportswashing – one of our favorite words of 2022 – as well as greenwashing, and the rise of ESG in general. Friedman said, “The thing about any kind of sports washing or phenomena like that is that it is so hard to hide anything in this world today. You can spend whatever money you want and in five seconds, someone will be online with the contradiction of it. So it’s not a strategy that I think is really very profitable.”

We returned to one of Friedman’s megatrends – climate. What will the energy revolution look like? Friedman said, “Green energy efficiency- energy in general- is a scale challenge. If you don’t have scale, you have a hobby. And I like hobbies. I used to build model airplanes, but I wouldn’t try to change the climate as a hobby. And so, you got to be very tough-minded about this. […] I wish everyone could live on wind and solar, but they can’t. And so we need to be very realistic about this. […] How do we make the transition from fossil fuels to renewables as fast as we can, at the scale we can, in the greenest way we can. That’s our challenge.”

We closed the podcast by returning to Friedman’s second megatrend – technology. Friedman elaborated, “First time in humanity. We have a realm where we’re all connected, but no one’s in charge. And China said we are going to actually project our Chinese values into Chinese cyberspace, our communist values. What do we in the West do? We say, ‘please Mark [Zuckerberg], please Mark, please be nice to us. Please turn down the volume on hate and division spewing out of your platforms. If we say pretty please, would you do that?’ And I’m not against any of these guys, but we all need rules. And when you control a platform with this much speed, scope, and scale, you need rules even more. So I’m all for ‘freedom from’, but I’m really big on ‘freedom to’. Whether you’re talking about the streets of Tehran or the platform of Twitter.”

What did you think of 2022? What do you hope to see in 2023? Find out more by listening to the latest Altamar episode, available wherever you get your podcasts. You can download the episode here. 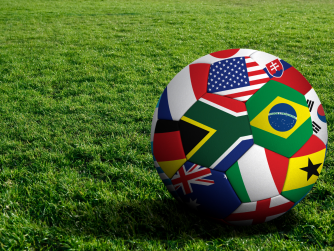 Guest: Nick Sprague,  a sports and technology entrepreneur and chairman of Love.futbol, a global NGO. The Qatar World Cup is a clear –...