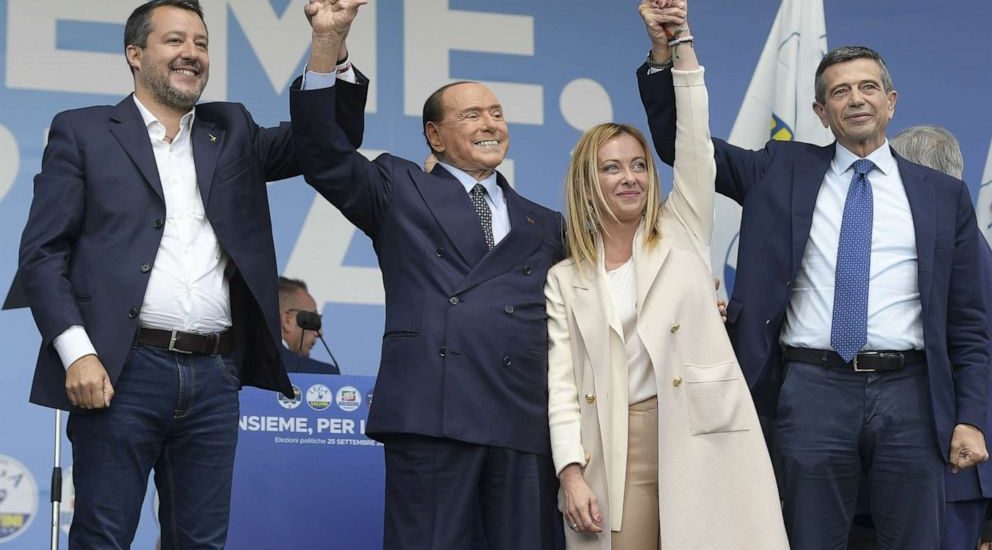 Giorgia Meloni will be Italy’s first woman Prime Minister and first right-wing leader since WWII. The rise of the Brothers of Italy party is a case study in the continued prominence of culture war politics and the implosion of centrist parties. Just how radical will Meloni’s government be?

Italy’s progress under the steady, technocratic, and respected leadership of Mario Draghi just made a shocking U-turn. Italy elected a coalition under the leadership of the right-wing Brothers of Italy party. Giorgia Meloni will be the next Prime Minister of the Italian Republic, its first woman leader, and the first right-wing Prime Minister since WWII. While campaigning, she positioned herself as more moderate and backed away from the party’s neo-fascist roots. Meloni made numerous anti-LGBTQ, anti-immigrant, and anti-US comments, but has since moderated her tone to attract younger voters. And while she has been a steadfast supporter of Ukraine and critic of Putin, her fellow coalition members are prominent pro-Putin voices. What will be the direction of the new Italian government? We explore these themes with our guest Erik Jones, Director of the Robert Schuman Centre for Advanced Studies at the European University Institute.

While this election result was expected, it represents a historic shift in Italian politics. We asked how the country could transition so quickly from Mario Draghi to this new right-wing government. “Everybody loved Mario Draghi and yet, a significant plurality of the population voted for a governing coalition that represents the opposite of what Mario Draghi represents. It becomes a majority if you include the Five Star Movement, which is what brought down Draghi’s government. So, in that sense, the country seems to be ready to move on,” explained Erik Jones.

The elections dramatically reduced the parliamentary seats of the center and center-left parties. What do these parties need to do to come back after this? Jones said, “What they need to do is work together. If the Five Star Movement and the Democratic Party, and Action – Italia Viva – which is the centrist group- had worked together, they would’ve been a block every bit as large as the right-wing block that won. And the only reason that Giorgia Meloni has this huge majority in both chambers of Parliament is because the Left refused to work together. The person who’s being regarded in the electorate as most responsible for that failure is the outgoing leader of the Democratic Party Enrico Letta.”

What about the Right: La Lega and Salvini? A few years ago, they were close to leading the country. This election, they were also beaten. What happened? Our guest said, “Part of it is the protest merry-go-round. Every election, people vote for somebody they didn’t vote for before. Ask yourself, what did Salvini do with all this power? He brought down the populist government but failed to dissolve Parliament and call for early elections. Then he joined Mario Draghi, who represents everything the Lega stands against and governed in a disciplined manner for about a year and a half. So, his electorate is looking to him and saying, I don’t know what you stand for. And by the way, you’re the protest guy and you’re not protesting, you’re going along. So, they’ve left him and now he’s hung out to dry.”

Next, the conversation turned to comparisons between Italy and the UK. Both countries are going through an economic and political rollercoaster, yet the markets have punished the UK much more than Italy. Is being a part of the EU helping with better market stability in Italy as compared to Britain? Jones said, “A hundred percent right. […] Italy is getting outside fiscal resources from Europe’s Recovery and Resilience package, which is called Next Generation EU. Italy is promised support by the European Central Bank through […] the Transmission Protection Instrument. But basically, what it all means is that Italy will not have to worry so much about the markets as it would have had to worry if it were not subject to those protections. And most important, Italy doesn’t have its own currency, so there’s not as much to speculate against.”

There is a lot of fear around what Meloni and her new rightwing coalition will accomplish. What did our guest think will do first? Jones explained, “In the short term, we all know what they have to do, which is they have to write a budget. That budget must be approved by both Houses of Parliament by the end of December. That’s a huge task. […] After they do that, they’re going to begin moving on some of these social issues, not to take away abortion rights and strip rights away from the LGBTQ+ community, but rather to shift the agenda in all of those debates to favor keeping your child rather than having an abortion, to favor living in a nuclear family that has a man and a woman. After that, they will get to their economic agenda.”

Altamar’s Peter Schechter said, “in essence what you are saying is that the Right in Italy is following the Right in many parts of the world feeling that culture and culture wars are more effective political instruments than socio-economic debates or policy differences. Those were the debates of the past, and the debates of today are more cultural.” Jones agreed, “Exactly. But also, unlike other parts of the world, Italy hasn’t had a classical right-wing government since the Second World War. This is the first time we have a real right-wing government with the Right firmly in control, and that gives them an opportunity to achieve social goals they never had before.”

The conversation then turned to another reason Meloni has made history. She is the first woman Prime Minister in Italy, a country steeped in patriarchal tradition. Altamar’s Muni Jensen asked, “She is charismatic but also a bit of a rookie with not a lot of experience in politics. Do you think that she will be able to advance her agenda with independence? Or will she be captured by the men’s club mentality?” Jones said, “Giorgia Meloni has been a Minister of Government. She was Minister of Youth in the period from 2008 to 2011. She’s been actively in politics since she was 15 years old. She has a 30-year career as an activist, and she built her own political party over the last decade from having 2% of the vote to having 26% of the vote. And she’s done all that in a very patriarchal society as a woman worrying about herself. So, in many respects, we want to do the old Grace Kelly thing – She’s been dancing backward with heels on and she’s at the top of the heap right now, and it’s pretty damn impressive.”

Altamar’s Téa Ivanovic asked about young voters failing to turn out and vote for this election. She asked, “What does this mean in a wider discussion about the country’s politics?” Jones responded, “There was a moment right before the pandemic when the youth in Italy formed its own political movement. It was called Sardines and they became very active. But their goal was not to be active in electoral politics, it was to be active on the street and in civic forums and all the rest. So, I think there’s a lot of potential for youth to become active. I think the offer in the political space just hasn’t attracted them.”

When it comes to foreign policy, will this new right-wing coalition switch allegiances? Where did our guest see Italy now moving in terms of what is happening in Ukraine? Jones said, “Meloni has a long record of supporting NATO, and she has no problem being opposed to Putin. As for Salvini, he’s got bigger worries. He got fewer than 9% of the vote. The old guard in his party wants him out. And so, he can’t play nice with Putin. As for Berlusconi, Berlusconi is 86 years old. And alas, he may say these crazy things about Vladimir Putin, but nobody in his party is going to follow him down that road. So, I think we’re okay on Russia and Ukraine, particularly given the constellation of power within the rightwing coalition.”

To wrap up, we asked about Italy’s relations with Brussels. Jones said, “It’s clear she has no interest in the short to medium term in picking unnecessary fights with the European Commission. The question is whether the Commission has an interest in picking fights with her. And unfortunately, some comments made by European Commission President Ursula von der Leyen threatening very explicitly Italy that if it misbehaves, there are instruments that can be used to deal with that. Those kinds of comments were not helpful.”

What will the right-wing coalition accomplish? Find out more by listening to the latest Altamar episode, available wherever you get your podcasts. You can download the episode here.